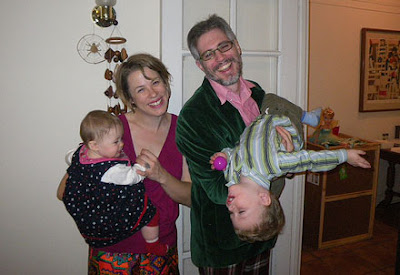 The picture above was taken on Christmas Day 2009. It is one of the rare photos where the four of us are together in one shot. Usually, young Master B demands to play with the camera, which results in extreme close up shots of him reaching for the camera and no candid shots. In looking at our pictures over the last half of 2009, you would think we only had one child: Vivian.

Anyway, I like this photo even though the kids aren’t looking at the camera. I like that Hal and I chose to wear pants with crazy patterns. (Personally, I think my psychedelic print beats his plaid. What do you think?) I like that Hal and I attempt to keep smiling in spite of the fact that our son is throwing a tantrum because he couldn’t have the camera. I like that young Miss Vivi appears highly amused by her brother’s antics. I like this photo because we tried to capture the impossible: the stillness of four human beings. We’re failing miserably, but we seem to be having a grand time. We keep on going.

A long time ago, my friend Matt told me a story. (Matt recently joined the Cult of New Parents. Welcome, Matt!) I can’t seem to remember the exact plot, but at the end of it, a character said, “sometimes, you just got to keep on going.” This probably does not translate well—since it comes from a fuzzy memory of a story and character I can’t recall. Yet, that line has always stuck with me. The line sticks on days like today, when I have these kinds of thoughts:

I got to see my kids for two waking hours, and those two hours happen to be when they are cranky and whining.

I work and my to-do list doesn’t seem to get any shorter.

It’s 10pm, and I’m so tired I could fall asleep on my laptop.

I think you have given yourself very good advice. And I hope you are giving yourself a break over the whole "doing it all" thing- it's not possible. So we just do the best we can, I guess.