Maybe it’s the pregnesia, but I think today was the first time young Master Bertram said, “I love you!” as he gave out goodnight air kisses.

Mind you, he does not like to kiss us directly. He prefers to blow the air kisses to us. I would not mind so much if I didn't watch him kiss the crocodiles, gorillas, and other odd beasties that we read about in his books.
Posted by Salt Chunk Mary at 11:48 PM No comments:

Remembrance of Things Past 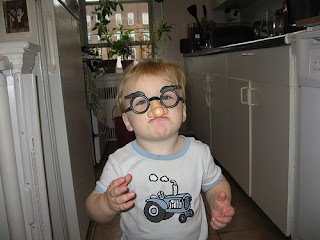 Last night, I was updating young master Bertram’s baby book, which only covers the first year of his life. As I looked at the heap of first birthday cards I had saved, I wondered if it was necessary to keep all of them. Then, given the upcoming arrival of baby no. 2, I started thinking about the purpose of a baby book. Is it for me? Is it for young Master B? Will he be interested in a meticulously kept chart of his weight and height fluctuations in the first year? As young Master B’s mother, is that want I want to remember? It’s so easy, to start collecting stuff, his first drawings for example. I still feel strange putting his early, primitive scribblings in the recycle bin.

All of these thoughts made reflect on a friend—and an only child—who had been charged with sorting through his dead parents’ belongings. The enormity of such a task, an entire lifetime of stuff. What do you keep? What do you toss? He didn’t have any siblings to ask or share in the drudgery. My friend was struggling with all the boxes of mementos his mother had dutifully saved—the report cards from elementary school, yellowed newspaper clippings, old beat-up toys. Was he under obligation to keep those things because she had kept them?

My friend was left in a no-win situation. If he tossed it, he would feel guilty. If he kept it, he would resent that he had to keep these things in his tiny, substandard NYC apartment, or worse, pay for storage.

When I am dead, I do not want Bertram to decide what’s important to keep. Note to self: I hope he will be free of that burden. As we go through these eighteen years, I plan to select a few items; perhaps all that can fit in one standard-sized moving box.
Posted by Salt Chunk Mary at 11:17 PM No comments: