When Vivian cries, my response is, "okay, little lady." Bertram, my ever-faithful, repeating toddler, says it too, like an echo.
Posted by Salt Chunk Mary at 11:28 PM 1 comment: 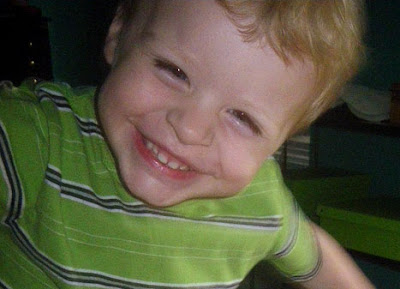 Parts of me want to capture two-year-old Bertram in a bottle and keep him this way forever. You know where you stand with young Master Bertram at two years of age: the highs are extreme and will manifest in exuberant jumping and running. He will bound into our laps and say, “aw, huggy!” He cannot resist kissing Vivi and saying, “Eyes. Nicely.” That is young Master B shorthand for what we often tell him, “Touch her eyes nicely.”

Also, I know that I’m his mother, but I do believe that Bertram has a great, warm smile. The kind that radiates outward—you can’t help but smile when you see it. I think, for this reason, young Master B has quite the following. Indeed, I often feel like I’m traveling with the tiny blond mayor of our block.

I was particularly charmed by Young Master B’s exuberant happiness to attend his first art class. (It was just him and me as Parental Unit #2 held down the fort with young Mistress Vivian.) I told Bertram that we were going to make art, and he clapped his hands and said, “Yeah art!” He then proceeded to walk on his tippy toes for most of way there, squealing “art!” At the class, we were encouraged to take the paper off the crayon, so that we could use the sides and the tip to make circles and lines. I think Bert’s favorite part of the class involved the star stickers. He hopped around the room, putting the little stars on everything—my neck, the paper, the floor, his shorts. We had a blast.

Yet, with the toddler’s uberbliss also comes the dark underbelly—the extreme anger, frustration, and sadness. In what seems like an instant, young Master B will go from joy to screaming, crying and rolling around on sidewalk like a possessed demon. Of course, I do not want to bottle this part of two-year-old Bertram. No, no this side of Bertram makes me want to run for my liquid friends, Senora Corona and Don Prosecco.

How I wish that these tantrums could be like an aria—Bert alone onstage, feeling his emotional pain, and we the parental units waiting to respond in the audience. Yet, now we have the Vivian Factor, which means Bert’s tantrums can easily set off a high-pitched newborn squawking session. Just imagine old Parental Unit #1 pushing a stroller the size of the Queen Mary down the street with two screaming kids—old women giving her the look that translates to “clearly, you are an awful mother.” That’s fun times, that is.

What strikes me is the intensity of Bertram’s feelings. For example, Bert loves trains, from old-fashioned steam engines to boxy silver subway cars. And, in an effort to not be land locked in our apartment because we have to schlep two kids and the stuff of two, Parental Unit #2 and I have tried to use our weekends to get away from our home base. This means that we take the subway. On the train, Bertram is lovely; he quips along with the computerized voice command to, “Stand clear of the closing doors please.” He likes to watch the lights flicker in the tunnel as the subway rattles along on the tracks.

Once we reach our destination and start to exit the station, I can almost see the pain in Bert’s face, because we are leaving such a fantastic and wondrous thing as the New York City subway. “Train! Train! Aaaaagh!” yells a tearful Young Master B with limbs flailing about and his body jerking against the stroller straps. If I, too, had just discovered trains, I might be similarly enraptured. Oh, but what a drag it is for his parental units to carry his thrashing body away from the station. We must make an offering of yogurt raisins to distract the angry spirit, so that the gleeful boy will return. All the while, Vivian gums the outer rim of her carrier with gusto. I think she must be taking notes.
Posted by Salt Chunk Mary at 12:08 AM No comments: