Sailing the Seas of Cheese 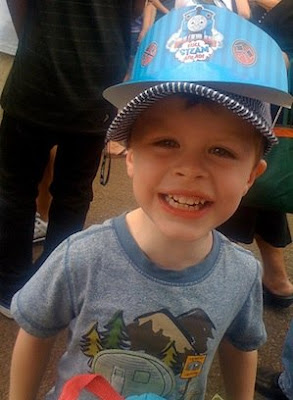 I remember saying that more than once in my days at Florida State University. So what better way to title a post about tantrums—then by citing the album by a band I that I loathed to hear. Even now, my shoulders kind of creep toward my ears in anticipation of the first few dreaded notes of “Jerry Was a Race Car Driver.”

Likewise, we—the Parental Units—have been on guard waiting for young Master B’s Mega-Epic Bad Time Tantrum Explosion. When he’s a teenager, I’ll be sure to suggest that he name his first band that. To which, I’m sure he’ll reply, “Suck it, Mom.”

But I digress. I remember when other parental units used to sigh and shake their heads when I mentioned that young Master B had hit the terrible twos. “Just wait until he turns 4,” many people said. Wait indeed. In the blink of an eye, he will transform from a pleasant chatty boy to a screaming mess of flailing limbs. The crazy part is that these tantrums arise from seemingly benign situations—he watched a Diego, but wants to watch another one; or he doesn’t want to change from pajamas to day clothes. Imagine the Incredible Hulk as a 4 year old—angry, impulsive, and nigh impossible to contain. Trust me, you won’t like him when he’s angry.

Once underway, these tantrums require every inch of my own self-will to stay calm and emotionally disconnected, because frankly, I’d rather tell him to suck it and walk away. I’m not always successful in keeping my cool—as Parental Unit #2 would tell you. When I do manage some degree of patience and the Mega-Epic Bad Time Tantrum Explosion ends, I just want to crawl into a little ball and watch reruns of America’s Next Top Model. What? Oh c’mon, you know that show is even more hilarious over repeated viewings—unlike tantrums.

We’re trying new pre-emptive strategies—kudos to Parental Unit #2 for talking to young Master B this morning about how to handle situations when you don’t get what want. Dare I hope this little chat made an impact on young Master Bertram? As for my own attempts, I could feel Bertram ramping up for Mega-Epic Bad Time Tantrum Explosion last night. Instead of getting angry when he yelled at me, I used humor. I told him in my best announcer voice, you know the voice of the dude who does commercials for mud bogs or vehicle demolitions, that guy, “Oh that’s too bad, because I’m going to read the greatest story in all the world.” Then, I proceeded to go around the apartment, dramatically turning off the lights, while promoting the story I intended to read, “Greatest. Story. In. The. Wooooorld.” It worked—situation diffused.

Honestly, I feel that I’m still holding on to the shell shock of young Master B’s colicky past—so the anticipation, the waiting for the next Mega-Epic Bad Time Tantrum Explosion is actually more stressful than the tantrum itself. It’s an anticipation similar to what I felt like during that summer of 1993, when I could bank on hearing that Primus song, eventually.
Posted by Salt Chunk Mary at 6:56 PM