You Betta' Fear the Never Napper 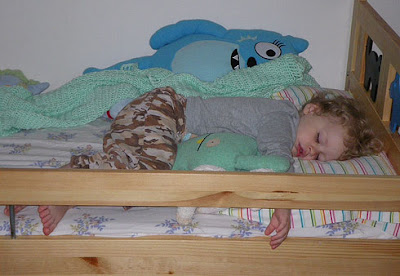 When I first learned that I was pregnant with young Miss Vivi, a fellow mom with kids who were two years apart in age, said to me, “the key to having two kids under age three is preserving everyone’s sleep schedule.” This woman spoke the truth.

Thus, when I manage to get both Vivian and Bertram (formerly known in infancy as the Never Napper) napping at the same time and in the same room, I feel like I have won the lottery. More than that, I want to do cart wheels around the apartment. I am skiing down that mountain holding a York Peppermint Patty! My internal monologue sounds something like this:
Hurrah! Now, I have two hands free! I could take a shower, or write a post on that blog. I could give a book my full attention. I could eat a meal with a fork and a knife.

Once I’ve decided what I will do with this precious pocket of time, the negotiation begins, “Okay, I will take a shower, after I clear the breakfast dishes…oh, and sweep the kitchen floor.” Just as I’ve managed to prep the kitchen for the next round of destruction, and most definitely before I’ve managed to take that shower, I hear the telltale stirrings of young Miss Vivian. The remainder of young Master B’s naptime is then spent nursing young Miss V.

Of course, what I have skipped over is what it takes to put a nursing newborn and the Never Napper down for a nap at the same time. First, I must establish the napping environment: I draw the blackout curtains closed, I turn on the soft tones of lullabies fashioned from The Cure songs of my youth*. Next, I sit in the recliner with Vivian, let her latch, and then, young Master B climbs up in my lap and maybe, if all goes well, he drinks his milk and nods off to slumber land.

Alas, my intrepid Never Napper has many tricks up his sleeve. They include thrashing of the limbs, pointing to items in the room and naming them, singing, asking to read more books, requesting different lullabies, or poking me in the face. When these shenanigans begin, I de-latch Vivi, deposit her in the crib and hope she remains entertained long enough for me to help Bertram get to a sleepy state. At this point, I would be remiss if I did not note that Vivian also has excellent limb thrashing skills.

Back in the recliner, the Never Napper sprawls out on my lap. Perhaps, he thinks he has evaded the nap. But no, Parental Unit #1 will not be thwarted! In an attempt to quiet his body, I encourage him to hold my hand while we rock in the recliner. I urge him to be quiet and to close his eyes over and over again. Timing is of the essence because Vivian’s “eh, eh, eh” sounds can ramp up to full Def-Con 1 level in mere moments. Then, we’ll be back to where we started—with Vivian on the teat and Bert running around the room shouting “purple” or another word that he has newly learned. Is is just me or are these so-called developmental outbursts toddler code for “my Mom is a sucker”?

If all else fails, Parental Unit #1 must drop the A-bomb of parental commands: “It is nap time. Time to lay down, close your eyes and go to sleep.” I then perform a sibling dosey-doe with Vivian going into the Big Boy Bed and Bertram going into the crib. I grab Vivian and we depart. As I shut the door, I hope for the best. Of course, by “best,” I mean only 30 to 40 minutes of the saddest wails that a toddler can muster.

As you can see in the photo, I usually manage to defeat the Never Napper, but it is a tiring process. Why can’t humans evolve to feature an on/off switch that molts off when kids turn 20? I believe that would be so much easier!

*Back in the pathos of my teenage years, when I was pining over some cad, sitting in front of the record player so that I could drop the needle on Boys Don’t Cry over and over again, I never imagined that I would be covered in spit-up and rocking a whiny toddler to sleep.