Language Is a Virus, Part 2 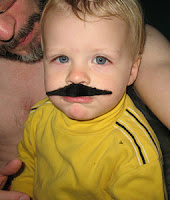 Young Master B’s vocabulary is exploding! This is a good thing because it distracts us from the fact that his potty days have, well, gone down the toilet. I think we had a fluke burst of potty lust, and now we’re back to diapers, diapers, diapers.

But I digress; my point is that he’s picking up words like crazy. I’m not just talking about mimicry and repetition (although there is plenty of that, too); young Master B understands the words too. Last Friday, as we walked back from the sitter’s house in the bitter cold, young Master B looked up at the starless NYC sky and said, “sky.” I have no idea how he made the connection between the twinkle, twinkle stars that shine “like a diamond in the sky”—a song he has heard a bazillion times— to the thought that “this black veil of night above me is called sky.”

I also hate to admit this publicly, but I also think that young Master B’s word options have grown through exposure to TV shows like Yo Gabba Gabba, Jack’s Big Music Show, and the classic, Sesame Street. Yes, we read to him and yes, we talk to him; but put a singing puppet in the mix and you’ve got Bertram’s full attention. Words that are featured on the shows—for example, “fun,” “dance,” and “music”—have quickly become part of young Master B’s lexicon.

All this praise to the boob tube when The New York Times just reported that one of the key traits of happy people is that they watch less television. Maybe so, but how is their vocabulary???
Posted by Salt Chunk Mary at 11:54 PM